Franco Cesarini showed since childhood a strong inclination for music. At the age of seven, he joined the children’s choir of Bellinzona (Switzerland), his hometown, where his talent soon established itself: fascinated by the world of sounds, he was able to reproduce the music he heard on the piano, and this before having learned any notion of music. Later it was time to seriously learn an instrument: he took his first steps on the piano, while his passion for the flute was born soon thereafter.

At the age of 11 he attended a concert by flautist Peter-Lukas Graf, which was to be decisive for his future choices. From the very first lessons he revealed a keen interest in understanding the mechanisms that lead to musical creation, remaining enchanted by the works of the great masters. Two composers in particular attracted his attention: Claude Debussy and Béla Bartók. The study of these composers encouraged him to create something on his own. With great enthusiasm he began to devote himself to composition.

At the age of 16, his parents enrolled him at the Giuseppe Verdi Conservatoire in Milan, in piano and flute classes. Over time his passion for the flute took over, and he was admitted into the class of Peter-Lukas Graf at Basel Conservatoire, thus realizing a dream. Intense years of training followed, which saw him simultaneously engaged in his flute studies as well as in conducting and composition studies, progressively graduating in the three subjects.

Franco Cesarini found in his composition teacher, Robert Suter, a demanding personality who knew how to channel his predisposition, integrating it with the necessary writing discipline. His conducting teacher, Felix Hauswirth, introduced him to the fascinating world of wind music. During his studies he won the National Music Performance Competition and, with his Kriegslieder, he won the composition prize “European Year of Music 1985” in addition to winning, for three years in a row, the scholarship of the Ernst Göhner-Migros Foundation.

“Franco Cesarini has the rare gift of being able to make amateur musicians play like professionals, and sometimes even better.” 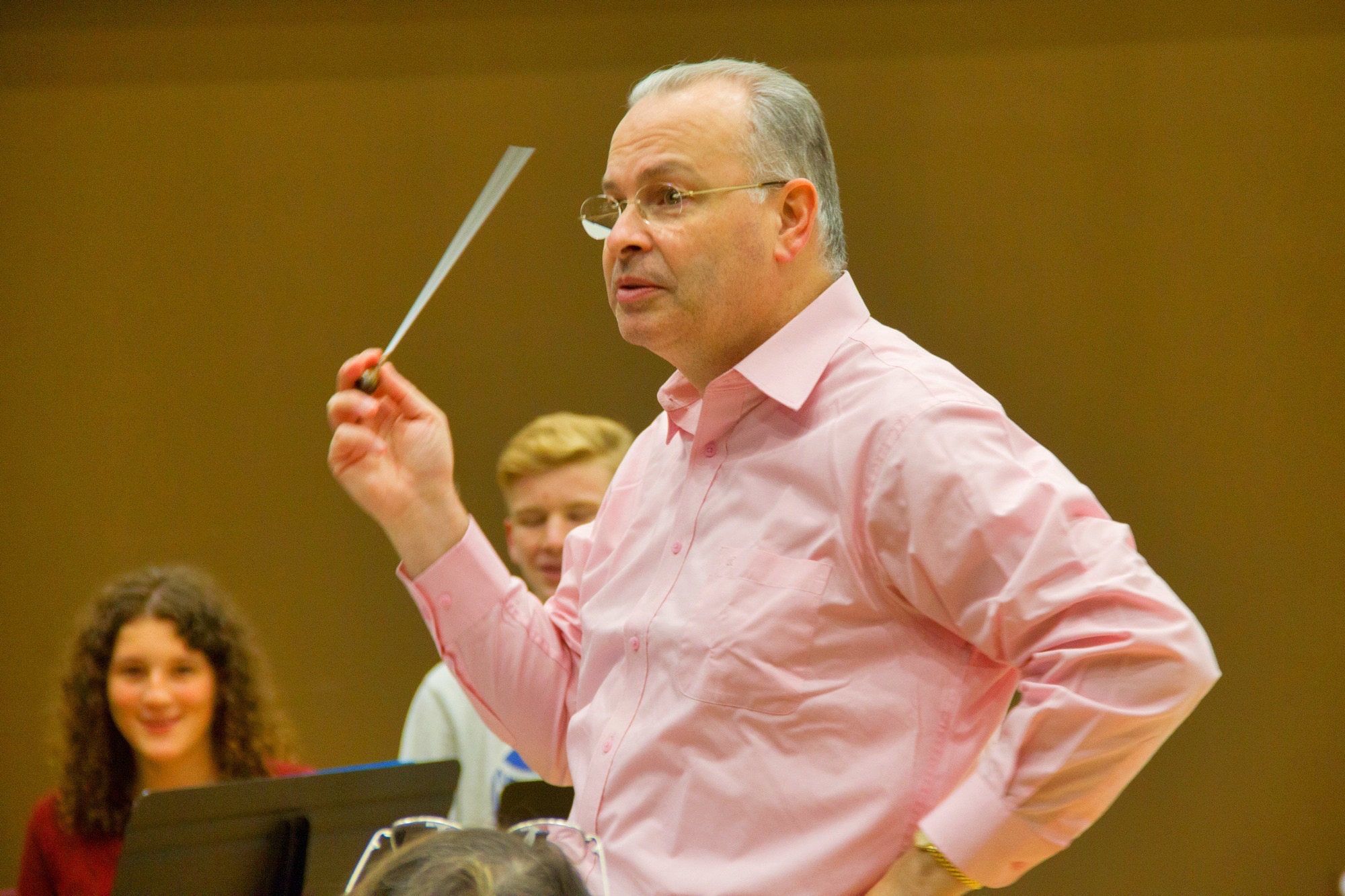 Franco Cesarini took his first steps in conducting as a choir conductor and later gained experience directing various ensembles, until in 1993 he was appointed as conductor of one of the best Swiss wind orchestras in the excellence category, the “Feldmusik Sarnen”.

His career reached a definitive turning point when in 1989 he was appointed Professor of wind conducting at Zurich Conservatoire (Zürcher Hochschule der Künste), where he taught until 2006. He showed an increasing fascination with composition for wind orchestra: if for symphonic orchestra the tonal resources have already been largely exploited by great composers of the past, instrumentation for wind orchestras is still a largely unexplored field.

In 1989 he began his collaboration with the Dutch publishing house De Haske, which contributes significantly to making his works known all over the world. In 1998 he was appointed permanent conductor of the symphonic wind orchestra Civica Filarmonica di Lugano  with which he has held countless concerts and also making multiple recordings, which led him to win two editions of the Federal Music Competition and the international competition “Flicorno d’Oro “in Riva del Garda, in the highest category. In 2001 he was invited as a “composer-in-residence” by the University of South Missouri (USA). From 2001 until 2021 he was professor of harmony, analysis and wind orchestra conducting at the Conservatorio della Svizzera Italiana in Lugano.

In 2011 he took over the direction of the Orchestra di Fiati della Svizzera Italiana conducting it on many occasions at home and abroad until 2018. In the same year he celebrated 20 years as director of the Civica Filarmonica di Lugano with the world premiere of his second symphony at the traditional gala concert.

Franco Cesarini has also been a member of the music committee of the Swiss Band Association (since 2019).

Alongside the Civica Filarmonica di Lugano, which he conducts permanently, Franco Cesarini enjoys an important international career as a guest conductor, visiting most European countries and performing in both the USA and Asia. He has also recorded two CDs dedicated to his compositions with the Band of the Royal Netherlands Army.

His compositions have been performed all over the world; many have been recorded and have entered the standard repertoire of the most renowned concert bands. Among the most popular are Poema Alpestre, Blue Horizons and more recently, his impressive symphonies which are enjoying great success.

2021 marked a turning point for Franco Cesarini: he founded Edition Franco Cesarini with the aim of publishing his works independently and transmitting his creativity and enthusiasm to his many fans all over the world.