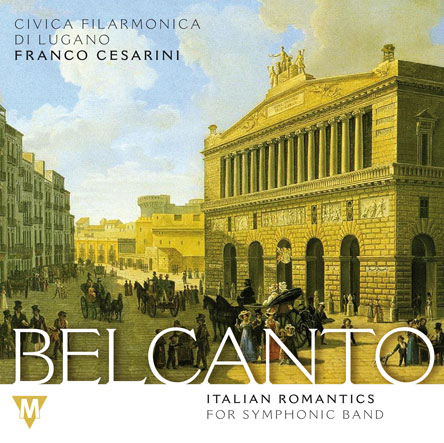 Tancredi, composed in 1813, the first recording of Franco Cesarini’s transcription, is rarely performed in today’s opera houses, however its overture, or Sinfonia, as it was called at the time, is well-liked and has received regular performances over the years. The arrangement for concert band has been written so as to retain the original spirit of this immortal short composition, one of Rossini’s favourites.

The second recording features Omaggio a Bellini. Saverio Mercadante, inspired by the operas of Bellini, created this richly contrasting overture from lyrical and dramatic moments in his own works. The arrangement offers modern concert bands access to a composition that, due to its obsolete instrumentation, is otherwise lost forever. The recording is a valuable tool to perform the piece at best, but also to enjoy this wonderful piece of music!

The Barber of Seville is based on the first of Beaumarchais‘ (1732- 1799) two sequential plays, The Marriage of Figaro being the second, although unusually the overture does not contain any themes from the ensuing opera. The music, however, is sparkling and tuneful encompassing the ‘spirit‘ of the story that is about to unfold.

This overture, called Sinfonia, is without doubt one of the best original works for concert band to emerge from the 19th century. It is characterised by its fluid spontaneity as well as its rich texture. This arrangement offers bands the opportunity to perform a work of high artistic value, which otherwise would be forgotten.

In the monumental overture to the opera La Gazza Ladra (The Thieving Magpie) Gioachino Rossini employs themes from the opera itself in order to prepare the audience for the material to come. The overture contains themes that stay long in the memory of the listener, as well as spectacular use of the famous Rossini crescendo. The wonderful arrangement for concert band by Franco Cesarini retains all of La Gazza Ladra ’s original charm, and is ideal as a concert opener.

Camillo De Nardis’ Il giudizio universale (The Universal Judgement) was awarded first prize at the Competition for Band Composition held in Naples. This composition was inspired by Verdi’s Requiem with its melodramatic style, sudden changes of atmosphere and imposing moments of fortissimo.

A wonderful CD that can expand the range of the repertoire of concerts and competitions at once!

The bel canto style is characterized by the perfect evenness of the voice, by an excellent legato, an incredible agility and flexibility, and by a soft tone. The fact that greater emphasis is given to technique rather than volume, means that bel canto has for a long time been regarded as an exercise for demonstrating the performer’s skill. This type of singer would be able to hold a candle in front of their mouth and sing without the flame flickering. Rossini, Bellini and Donizetti were leading representatives of this style of composing. In the course of 19th century, opera composers such as Verdi and Wagner started to ask for more dramatic and robust voices. Those who opposed this new trend began complaining about losing a tradition; Rossini is said to have lamented: “Alas, we have lost our beautiful bel canto”.

The concert band’s valuable task is to offer music to the public as well as to teach music to young people, especially in the Scuola Musicale di Lugano, run by the Civica Filarmonica itself. The Civica Filarmonica carries out cultural engagements, and can offer a repertoire of roughly 1200 pieces.