The Artistry of Franco Cesarini 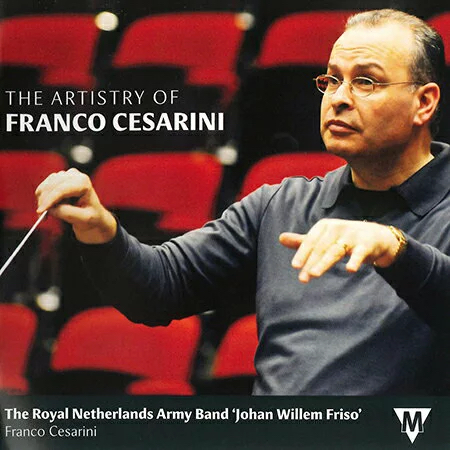 After the recording of his sumptuous symphonic poems Poema Alpestre, Mosaici Bozantini and Blue Horizons with the The Royal Netherlands Army Band “Johan Willem Friso”,  Franco Cesarini performed again with this band in the creation of The Artistry of Franco Cesarini.

The first recording offers a new transcription of George Gershwin’s masterpiece An American in Paris. In this symphonic poem, George Gershwin portrays a day in the life of an American tourist in Paris. The music accompanies him along the Champs Elysées and through the Latin Quarter, where he becomes – in the form of a blues – overwhelmed by homesickness. A meeting with a fellow countryman brings back the upbeat mood, and our tourist enjoys the typical French atmosphere. A delightful trip to the French capital!

The second piece Bulgarian Dances Part II is a free rhapsody, divided into four distinct movements based on famous Bulgarian folk songs. These songs have a very old tradition and stem from both the antique world of Byzantium and even earlier in the ancient and mysterious civilization of the Thrace region. In the beginning they were monodic songs, then diaphonic, with characteristic dissonances of major and minor seconds which make them unique. What also makes these songs so fascinating are seductive and complex irregular rhythms. The composer, while remaining faithful to the original spirit of the songs, has not hesitated to broaden the musical ideas, enriching them and making them more suitable to the rich palette of colours of contemporary concert bands.

The third work, Old Russian Romances  Op. 44, shows the composer’s fascination for foreign culture, art, literature and music, which often serve as a source of inspiration for his compositions. For Old Russian Romances, Cesarini immersed himself in the study of Russian folksongs and eventually selected a number of joyful and also melancholy melodies which he worked into his composition with typical craft and imagination but also with respect for the original tunes.

Puss in Boots Op. 45, a fairy tale character first mentioned in writing by Charles Perrault in the 17th century, is a popular figure in children’s books, cartoons and comics. Franco Cesarini was inspired by the utter simplicity and naturalness of the tale and put it into a musical fairy tale which—thanks to the narrator’s voice— can be performed as a production with scenery.

An American in Paris