A Debussy Album for Flute and Piano 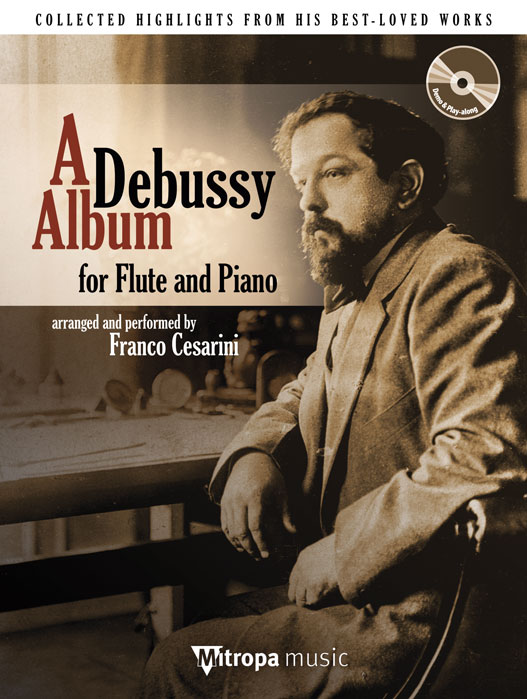 Numerous pieces for flute were written in the late 19th and early 20th century. In particular the French school made its contribution with composers such as Gabriel Fauré, Paul Taffanel, Philippe Gaubert, Jacques Ibert, Cécile Chaminade, Georges Hüe and many others. The first composer to attribute a prominent role to the flute was Claude Debussy in his orchestral work Prélude à l’après-midi d’un faune from 1894 – a work that marked the unfolding genius of this French composer and the first piece which can be considered as truly Impressionist. Debussy is the first and greatest musical representative of French Impressionism: no other composer, with the exception of Maurice Ravel, has been able to achieve or aspire to such levels of excellence.

Flute literature is full of pieces from the Impressionist school; many of these compositions form part of the standard repertoire of every flautist. But they all have one ‘disadvantage’; they are very difficult to play! To prepare a student to tackle this important musical heritage adequately, there are virtually no original compositions. Therefore I have decided to search at the source. Surely the best way to get acquainted with the repertoire of Impressionist composers is to start with their most important representative? The pieces chosen and adapted for this collection give students an ideal introduction to this musical style, without overburdening them with technical difficulties. In particular, students will broaden their knowledge of the various aspects of tone control in the different registers, and will acquire a suitable differentiation of tone, in order to be able to exploit the numerous shades and nuances of these superb compositions.

On the enclosed CD you will find a complete recording of all the pieces, as well as the piano accompaniments alone, for you to play along with. These immortal pieces will enrich the musical knowledge of young flautists and at the same time guarantee good preparation for performing original repertoire in the future.