Arranged for Flute and Piano by Franco Cesarini 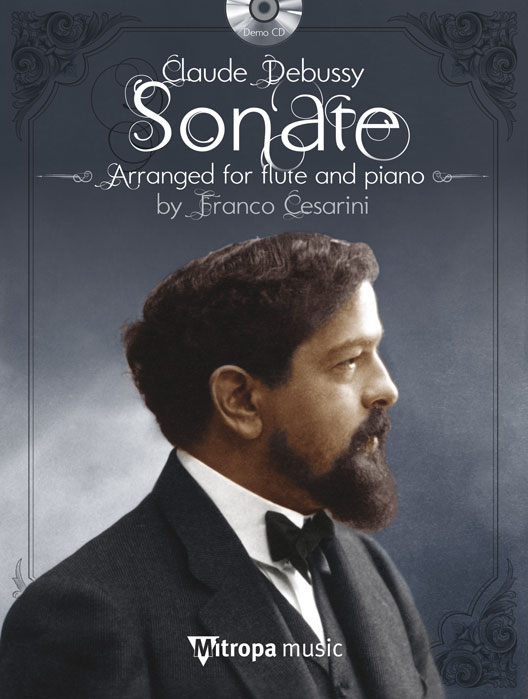 Claude Debussy (1862-1918) is inextricably linked to the musical manifestation of impressionism. Though fewer in number than his works for solo piano or orchestra, his chamber works are none-the-less impeccable examples of the genre. Debussy dedicated his Sonate for flute, viola, and harp – which is listed in the Lesure catalogue of works as L 137 Sonate en trio – to his wife, Emma. Composed in 1915, the sonata was premièred on 9 March 1917 at a benefit concert in Paris. Like other later works by Debussy, this piece captivates the audience with its sweet and at the same time melancholy atmosphere, further coloured by Oriental influences. His distinctive choice of instrumentation has probably also contributed to interest in the work; flute, viola, and harp had not been used in that specific combination before. Unfortunately it is not always easy to bring together this rather unusual chamber configuration for a performance. Even though the sonata does a beautiful job of featuring the flute, it is sadly one of Debussy’s seldom-performed pieces.

To remedy this, Franco Cesarini has created an arrangement in which the viola and harp parts are given to the piano. It was an exciting and challenging task, not simply to transfer the notes of the viola and harp to the piano, but also to transfer as much of the colour of the original to the piano as possible as well. This arrangement should lead to more frequent performances of this outstanding work, both for its own sake, and for the sake of flute players everywhere.