Concert Collection for Flute and Piano

Arranged and Performed by Franco Cesarini 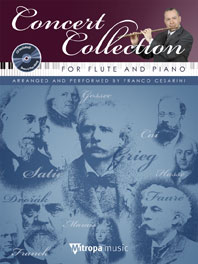 This collection contains a number of intermediate pieces from the Baroque period to the beginning of the 20th century. Most of the pieces were originally written for other instruments, and were only later adapted to the expressive potential of the flute. The variations of Marin Marais, for instance, were composed for viola da gamba. In his introduction of 1701, the composer writes that the piece has been written in such a way as to make it playable by other instruments, such as the flute for example. Of the original thirty-two variations I have selected twelve to provide the widest possible variety of styles. This selection is about seven minutes long and is suitable for performances with or without basso continuo.

The Romantic pieces of Dvořák, Cui, Franck, and Grieg allow a particularly refined approach to the prevailing musical interpretation. At the same time, they require a subtle differentiation of dynamics and tempo and a balanced use of vibrato and rubato. The pieces by Fauré and Satie are particularly suitable for introducing flautists to the sound idiom of the Impressionists. This musical tendency marked a renaissance of the flute after a period of neglect by the major Romantic composers.

The melodic nature of most of the pieces is a challenge to explore a wide range of sound colours – an essential precondition when encountering the repertoire of important composers.

The enclosed CD provides a demonstration of each piece, followed by the piano accompaniment. Of course, this interpretation reflects the own musical taste of Franco Cesarini and is by no means the only way to perform these pieces. Use all your musical sensitivity and creativity to achieve your own personal interpretation that expresses your own insight into the pieces!