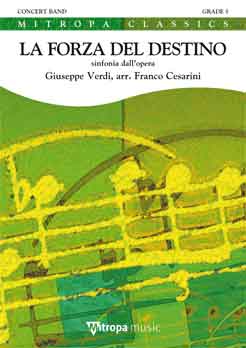 Giuseppe Verdi was to Italian opera what Beethoven was to the symphony. He was considered a national treasure, serving as the successor to the great Italian opera composers Donizetti, Rossini, and Bellini.

La Forza del Destino, Verdi’s 22nd opera, was completed in 1862 and premiered in St. Petersburg on November 10 of that year. The overture was not heard until Feb. 27, 1869, when the opera was revised and presented at La Scala in Milan.

At first sight, the overture La Forza del Destino looks like a simple mixture of main themes of an opera. However, the formal cohesion given to this piece by the two main themes (the one of destiny and the one of Leonora’s prayer) makes it one of the most popular overtures in concert halls.